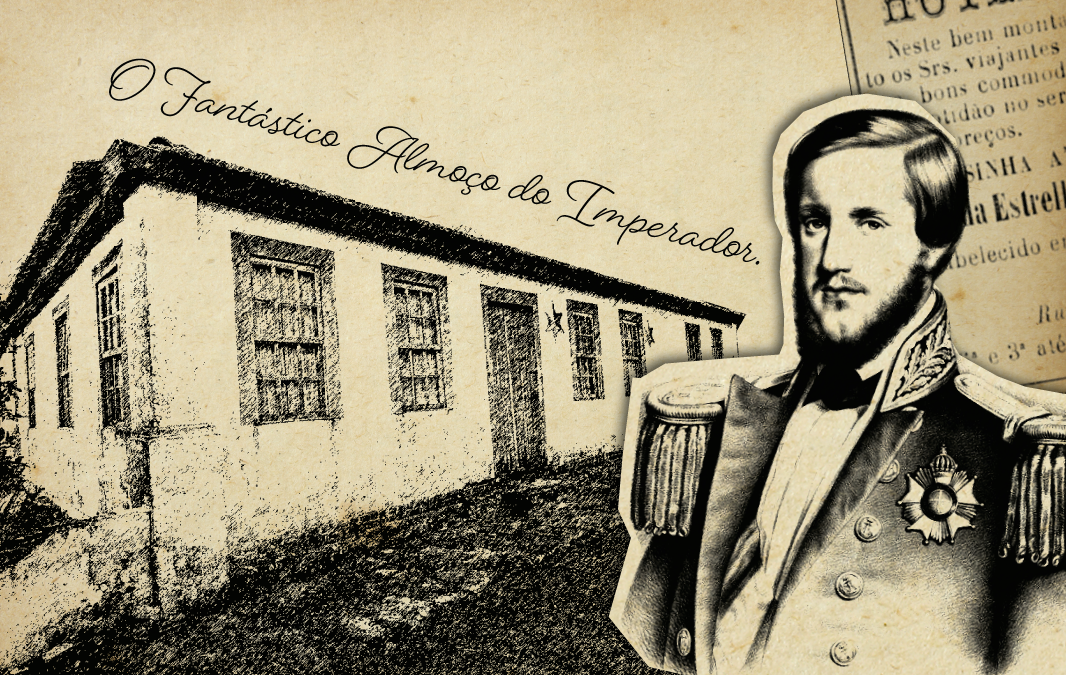 Who passes now and then by the Dinarte Garrett Street, the main street in the district of São Luiz do Purunã, in Balsa Nova (PR), I invite you to turn around in time. Imagine: it was 140 years ago! The “arrive” that the people of the village usually pronounce for every welcome visit, was addressed that May 25, 1880 to none other than D. Pedro II and his entourage.

Don’t think of buildings as you see them today. Imagine, for example, the Casa da Estrela, which is probably the oldest of them still standing, all very well preserved, the smelling of the good wood in the furniture arranged to put the fatigue of the bodies shaken by the carts.

Think of a Boutin family, who had a very nice hotel in the village, whose name varies in the records: “Boutin”, “São Luiz” and even “Butim”. It was not a place for ordinary drovers, for those who went hungry and sometimes forced themselves to fill up the meat of dead cattle, which they found along the way. There – so the young James Kupka heard by his ancestors – “it was a five-star inn”, where the ox was killed for the treatment of guests with fresh meat.

The majesty – who had disembarked in Paranaguá and already passed through Curitiba and Campo Largo, besides the coastal cities, did not stay in São Luiz do Purunã more than a few hours, which is unfortunate.  If stayed a couple of nights and possibly D. Pedro II would have found among the twenty or thirty houses that stretched along the road, some lady to be charmed with or perhaps decided to found a theater, a botanical garden, or… a library in the village.

It is not that historians like good prose as much as the people of small villages, but they say – and they publish in big letters – that, like his father, D. Pedro I, the II did not dispense a tail. It seems that the visiting Emperor, to a lesser degree than his father, had his furtive encounters there between the books in the library which – for more than one reason – he attended regularly.

They had father and son, such a fame that Mr. João do Pito himself, a gardener from Alto Purunã also known – according to himself – as “João of the Ladies” would certainly have lost his title even before he was born. Imagine how much fun it would be for tourists to know that the Emperor would have left Purunã nicknamed “Pedro of the Ladies”. But he didn’t stay long enough to present us with a story of romance or seduction.

Before they say that I am “cooking” the main topic and leading my cattle along paths that do not lead to the destination – the Emperor’s lunch – I need to clarify that yes, words are like oxen, if we don’t lead them properly, they will deviate of the trail and can go to the swamp. I say, however, and I like to believe, that the Emperor did stay long enough for lunch in São Luiz do Purunã. But the reader needs to give me a discount as I write about that moment of the trip about which almost nothing is known.

It is known that D. Pedro II lost his mother at the age of one and at five he saw his father abdicate and leave for Europe, after he was accused of favoring the interests of Portugal to the detriment of Brazilians; it is known that instead of the closeness that every five-year-old child expects from his father, he received from him the title of prince regent and the responsibility for the future of this immense country. His tutor José Bonifácio made him study horsemanship, calligraphy, literature, mathematics, geography, natural sciences, painting, piano and music, fencing, Latin, French, English and German. Ufa!

It is also known that D. Pedro II enjoyed freedom and not just that of love. To please him, on his way through Paraná, a master freed a slave and a lady, three others (Ah, whoever can tell me the story of these four freedoms!).

It is said that at the age of 15, the boy Pedro was proclaimed of legal age and crowned emperor, dedicating his youthful years to the government of Brazil and to the studies that prepared him for this. Yes, reader, they say that there was a time when a ruler prepared himself to rule!

It is known that D. Pedro II was always faithful to the Constitution. And he was banned from Brazil by the Proclamation of the Republic, leaving without resistance towards France, where he lost his wife in the same month. He died in a Parisian hotel, as alone as at the beginning of his life.

It is said that after the fatal pneumonia, he still traveled… His dead body went from France to Portugal and from Portugal to Brazil, with Petrópolis (RJ) as the last stop, after they recognized this carioca from Boa Vista as “the greatest of Brazilians”.

It is also no secret that the Emperor praised the roads and doubted the durability of the Papagaios Bridge. And that engaged in small talks with people known today as streets name, such as Conselheiro Jesuíno Marcondes, the one that hosted the majesty in Palmeira. There the Emperor went to take a look at the lands that this Marcondes had sold to the imperial government for Russian colonization and which, since they were not suitable for agriculture, had been abandoned by the deluded immigrants. Note that the visit of the Emperor also serves to remind us that the “maracutaia” involving private greed for public money already existed in the time of the Empire.

It is even known that the real wife, Teresa Cristina, that of Bourbon, was very companion, discreet and limp – which helps us to imagine the Empress circling between the carriage and the old wooden floor, unfortunately not preserved, of the centenary house who received them.

However, nobody knows, in Campos Gerais, great things about the Emperor’s lunch at Purunã – except that it was mid-morning, as that was the custom. But here is a rare case where we can say that “ignorance” can be productive. For are it not in the empty spaces of information that we best fill it with fantasy and imagination? And unlike the “fake news” of political and social content, which whistle on everyone’s lives and wrap up the stomachs of the well-informed, it wouldn’t hurt anyone – and could even become a contest theme – to fantasize at ease about this lunch, wondering, or even inventing, what would have delighted the Emperor.

Since – now we are – talking about it, I took the liberty of interviewing natives, and also people who chose São Luiz do Purunã to live, on the Emperor’s imaginary menu. Starting with the person who provoked this agenda, the award-winning theater illuminator, Beto Bruel – of the Bruels of Tamanduá. “My grandfather, Augusto Bruel, said that the Emperor ate groundfire ribs with pine nuts”, he spoke in a solemn tone, making me laugh as he detailed the not-so-“light” image of pine nuts smeared in the fat of the rib. The researcher, Carlos Solera, without consulting the diaries of Dom Pedro II, supposes that a barbecue was held at the Papagaios Bridge. “Groundfire Rib”, confirms the entrepreneur Márcio Vecchi, owner of the Cainã Farm Hotel, without adding ingredients.

It also sheds light on the imagination related to the legendary lunch, the housewife Cleide Bertoja Kusiak: “I would serve feijoada, pururuca piglet and carreteiro rice”. Community leader Murilo Zanello Milleo, on the other hand, would serve a simple chicken soup, based on the record that this dish was part of the Emperor’s preferences. Let it be, then, without the breast! Because with the chicken breast, the cook Nelsi da Piedade, better known in the village as “Preta”, would draw praises from the Emperor about her famous pie.

The owner of the Varshana Boutique Hotel, Arlete Santos, joined the game assuming that the Emperor was served with rice, beans, cale, manioc flour and chop. But if she were responsible for the menu, the majesty’s imaginary table would, of course, have one of her restaurant’s specialties: “Ossobuco com couscous”.

With this level of competition, I would not risk offering any delicacies to Dom Pedro II’s real stomach, since whoever tries what I prepare sometimes falls off the horse.

My real wish would be to “cook” some more stories, the kind that run through the mouths of the ancients, while they are here, or even those who are already gone, and see them in a book or staged by the natives in Casa da Estrela transformed into a Cultural Center  – the kind of thing that the Emperor would certainly appreciate as much as a good lunch.

This is, of course, just a wish, like those of so many of us who circulate our dreams through the winds of these Campos Gerais. Desires, however, as well as imagination, skills and creativity, start like a horse’s trot… If you don’t try it, you won’t gallop! And you, reader, what would serve the Emperor?


* Leave your comment below on what you would serve the Emperor!

Joanita Ramos is a journalist, writer, artist and master in Education (UTFPR). Member of the Jornalista Amigo da Criança network (Andi/Abrinq/Unicef) and owner of farms in São Luiz do Purunã and São Caetano. Collaborated in the research for this text: Beto Bruel and Carlos Solera.