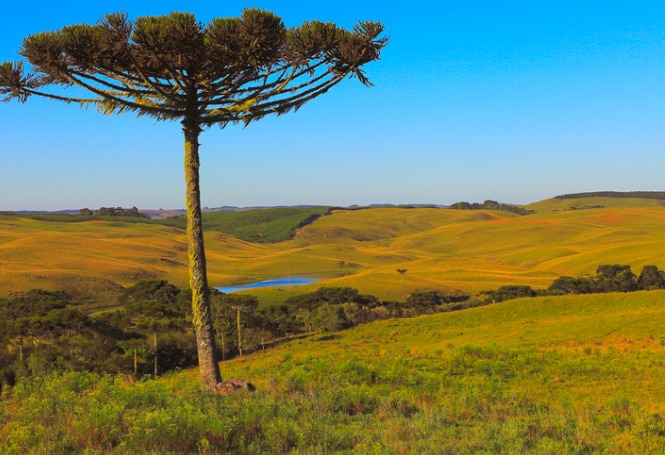 The southern Brazilian states, prior to deforestation, were mostly covered by the Atlantic Forest biome. According to IBGE, biomes are the “life set (plant and animal) defined by the grouping of similar vegetation types, with similar climate and soil conditions and a shared history of change, resulting in their own biological diversity”. As a subdivision of the biomes, we have the ecosystems, these also with their specific microclimates, vegetation, fauna and microbiota, interacting with each other and with the environment, coexisting in equilibrium for thousands of years, constantly evolving.

In Paraná, specifically in the Metropolitan Region and Campos Gerais, the Atlantic Forest Biome has two very characteristic ecosystems, the Araucária Forest (Mixed Ombrophilous Forest) and the Campos. Commonly, the Araucária Forest is seen as more significant, mainly because it houses the state symbol tree: Araucária angustifolia. However, Campos is no less important, it harbor great biodiversity, including endemic species – unique to that environment – of medicinal interest, as is the case with carqueja.

Field vegetation is marked by creeping and shrubby species that grow in the shallow soil. The plants have adaptations that allow the capture of water from the mists, since rain precipitates below this vegetation most of the time.

Originally, the vegetation of the fields was associated with capons from araucária forests. The term “capon” originates from tupi language, which means “round bush”, precisely because of the appearance of green areas, seen from a distance.

Studies conducted in this environment have identified more than four thousand different plant species, their predominance being grasse-plot. These include wild rosemary, Sinningia lineata, carqueja, brooms, amaryllis, barbatimão, various cacti and many species of orchids.

In the fields are known 92 species of mammals, 158 species of reptiles and 84 species of amphibians, the most significant being: pampas-deer, rattlesnake, anteater, seriema, tinamou, woodpecker, buff-necked Ibis.

Some of these animals have the ability to mimic, as their color resembles the environment, they end up unnoticed, thus being protected from their predators.

Together, fauna and flora form a complex web of relationships that ensure the integrity of the countryside and the provision of countless environmental services to society.

The Devonian Escarpment and the seesaw

The step between the first and second Paraná Plateau is surrounded by fields, marked by the Devonian Escarpment, which two hundred million years ago had a marine influence.

With the volcanic spill that hit part of the third plateau, the spare weight acted on the terrestrial plates causing the rise of the Seesaw, so the sea had to retreat.

Fields are at risk

Being open environments, the region of the camps became an area of conflict in the past, as well as the route of troops that transported goods between São Paulo and Rio Grande do Sul. With this, they became the first regions to be cultivated for agriculture.

In its original distribution, the Natural Fields have already occupied 13% of the entire territory of Paraná, strongly characterizing the highest altitude landscapes of the state plateau. A 2001 study published by PROBIO/Araucária found that at the time, there were only 0.24% of this ecosystem in an advanced stage of regeneration throughout the state.

One harmful practice is the constant burning and deforestation for large-scale monoculture planting and to make way for pasture, which feeds livestock.

These actions, added to the need to manufacture housing that are fundamental to human needs, without planning become harmful to the natural environment.

The pronounced decline in biodiversity is also due to the introduction of exotic species – those that are not natural from the locality – that compete for space, and because they have no natural predators, end up invading and taking over the environment. Hunting, animal trafficking and roadkill also contribute to the reduction of fauna, weakening the ecosystem and unbalancing the food chain, as these beings play important roles in nature, such as insect control, seed dispersal and pollination.

Mining is another factor that negatively impacts natural environments, especially when performed without soil recovery actions.

And what does legislation say?

There are several laws and resolutions that legally support the protection of these environments. These items are important allies and legal tools in legitimizing the conservation of natural fields and the entire Atlantic Forest biome:

In addition to our role as citizens, such as protection, waste disposal system, propagation and multiplication of good habits, it is necessary to report illegal practices, whenever observed, to the appropriate supervisory and surveillance organizations.Be sure to do your part, help conserve our natural heritage!